It was a pleasure to catch up with Icelander-turned Londoner Dr Helgi Johannsson regarding the ‘Wrongfooted‘ case.

Helgi is a prolific blogger – using Social Media to disseminate both useful nuggets of clinical information under the #TGDed hashtag (trauma gas education) and also occasional trash tweets on the weekend. Follow him at @TraumaGasDoc.

I was intrigued by the ‘Wrongfooted‘ case posted by Helgi – a classic case of the WHO checklist not being used properly. Several important lessons from this case, not least the need to use checklists appropriately … and the power of Social Media to disseminate important safety messages. Contrast this with the failure to disseminate safety lessons from a nearly identical case, as articulated subsequently by medical director Dr Dermot O’Riordan – the frustration being that the lessons learned from Dermot’s case weren’t made available to a wider audience.

Clearly ‘Wrongfooted‘ has penetrated deeply – over 10,000 views to date – awesome! Helgi even goes so far as to suggest that SoMe will be the preferred way of disseminating info on critical incidents in the future.

Helgi also raises the issue of online identities – the UK’s General Medical Council insists that doctors blog under their own names – which may cause difficulty if highlighting contentious issues or “whistleblowing”. Food for thought in any SoMe policy.

Listen to the podcast by clicking HERE

One thing puzzled me – despite the lessons of ‘Wrongfooted‘, Helgi reckons he’s never used a checklist for eg: RSI. Instead there is institutional resilience through ensuring that the environment is suitable – using same kit in the resus room as in theatre, and mandating that any RSI ‘on the floor’ utilises a trained ODP from theatre [note to non-UK readers – ODP is a trained operating department practitioner].

Whilst I am all in favour of minimising error through appropriate kit and staff, it strikes me that during an anaesthetic crisis or whilst performing a technically complex procedure such as RSI (where consequences of error are severe) is exactly the time a checklist SHOULD be used! Under pressure, perhaps distracted by other factors, relying on expertise may be enough – until a simple mistake (omitting to connect O2, forgetting suction, wrong dose induction agent) causes catastrophe. We’ve got 3-4 minutes to preoxygenate in RSI – a 60 s challenge response checklist should be used. Similarly in a crisis, use checklists. Moreover, using a checklist ensures a shared mental model of what is about to happen – and sets us up perfectly for dealing if an unexpected crisis occurs (CICO).

I’ll be raving on about this at smaccGOLD in a debate with Minh le Cong …. “real airway docs don’t need checklists”   – I’m arguing in favour of CLs, Minh against.

Come along and see the debate…

Meanwhile, you can download some anaesthetic crisis checklists HERE or browse the resources here 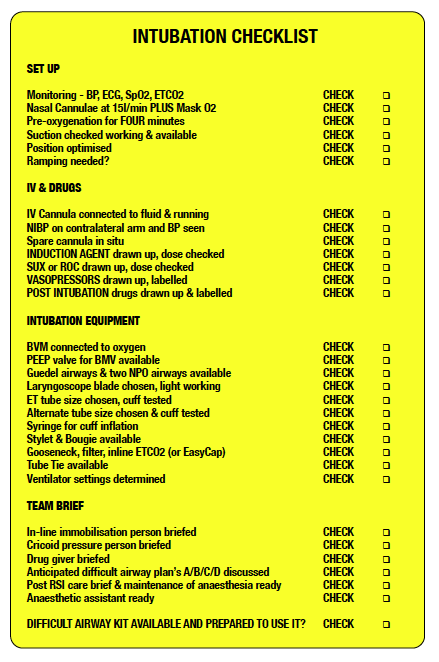 By Http://about.me/timleeuwenburg in PODCASTS on November 10, 2013.
← CASE #6 UPDATE – FIND THE BLEEDING, STOP THE BLEEDING PODCAST #21 – Dr Jamie Doube from Tacloban to Antarctica →

I am a Rural Doctor on Kangaroo Island, South Australia with interests in EM, Anaes & Trauma. I am an Ass/Prof in Aeromedical Retrieval with Charles Darwin University and hold senior specialist (retrieval) positions in NT and QLD Avid user & creator of #FOAMed; EMST & ATLS Director, Instruct & Direct on ETMcourse.com; faculty for Critically Ill Airway course and smaccAIRWAY workshops. Opinions expressed on these sites must not be used to make decisions about individual health related matters or clinical care as medical details vary from one case to another. Reader is responsible for checking information inc drug doses etc.

The ICE blog promotes discussion among Clinician Educators from around the world, archiving a variety of education resources. We welcome anyone with an interest in health professions education.

Discussion on the law that applies to or affects Australia's emergency services and emergency management, by Michael Eburn, PhD and Barrister.

A Hive Mind for Prehospital and Retrieval Med

The innane ramblings of a guy from Canberra...

where everything is up for debate . . .

The Tactical and Field Medical Blog

Reflections of a Rural GP

Adventures of a Medical Expat

Not just a GP

Why GP is the greatest job in the world

Life in the Fast Lane • LITFL